We live in an urban jungle (as if i have not stressed that enough). Sadly, Manila does not have enough open spaces. Or it does not have parks which are similar to the ones I went to growing up.

I grew up in Baguio City, at a time when the cold air smelled like pine. I grew up spending my weekends in various parks and open spaces (Burnham! Mines View! John Hay!). At that time, pollution was a thing from first-world urban jungles. On the other hand, Hugo is growing up in a different time and city, and I sure as hell will make sure he won't be short-changed.

This is the reason why we spend most of our time in our favorite park: Ayala Triangle Park.


Ayala Triangle Park is a 2-hectare open space in the middle of what can be (some of ) the Philippines' busiest avenues: Ayala, Makati and Paseo de Roxas. The Park itself is just a wide open space of grass and greenery: it does not have your usual swings and see-saws. It does have a jogging path (well, pedestrian lanes) and restaurants (some of the best in the city). We like bringing our picnic basket and blanket, some munchies, and entertainment for the kiddos (bubbles and balls).

While in the park, Hugo spends most of his time running around the greens and running after older kids and dogs. 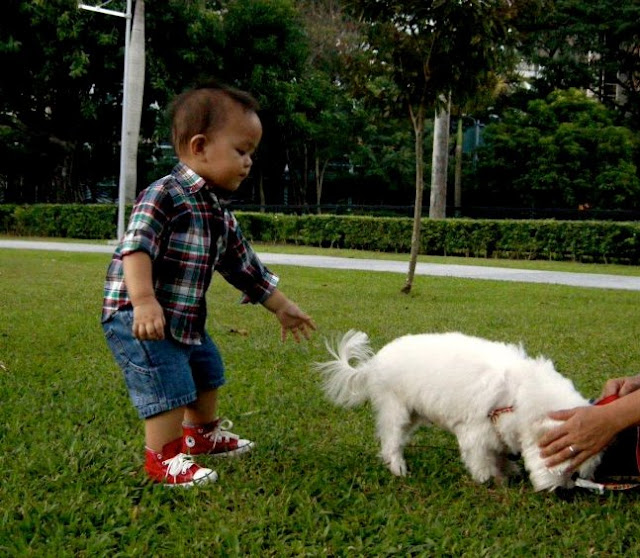 In fact, this is where we shot Hugo's birthday pictures.

The park also has big art installations that people can  touch and look at up close. 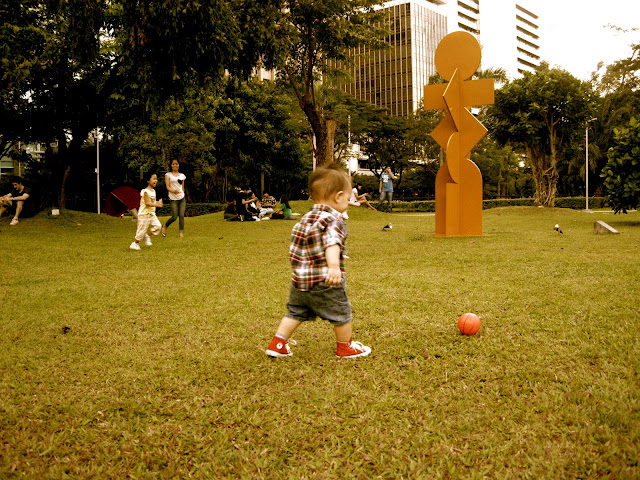 This Christmas season, Ayala Triangle's trees were decorated with thousands and thousands of LED lights. From 6-9pm every night, Ayala Triangle features a sights and sounds show where the LED lights blink and dance with Christmas carols. We viewed the show a few nights ago and the whole time, I excitedly watched it with one eye on Hugo, waiting for his reaction. Expectedly, Hugo was amazed (overwhelmed?); he kept saying "lights!".

This is just Hugo's second Christmas and now that he's already a little child who can appreciate things around him, I would like him to look back at this one day and think how happy the Christmas season is for him.  My friend, Ia, who was with us with her family, mentioned that she now understood why her parents brought her to the opening of the Christmas display of the COD Department Store when she was still a child. Now, it is our turn to create similar childhood Christmas memories with our young ones. 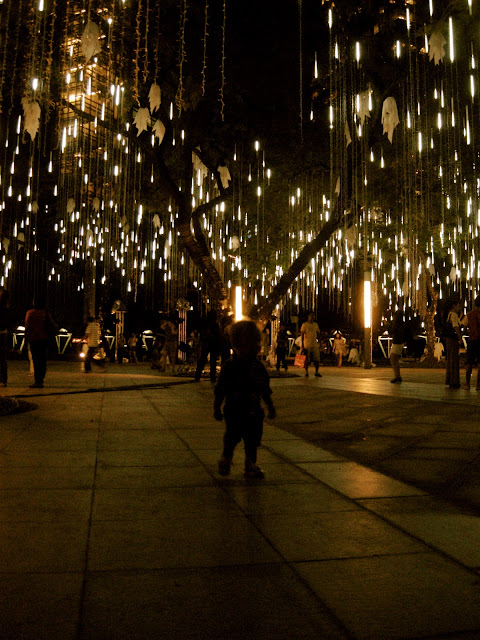 The lights and sounds show started last November 17 until will be until December 23. Definitely worth braving the Christmas traffic. :)
Posted by Adventures of Hugo and River at 4:06 AM

Email ThisBlogThis!Share to TwitterShare to FacebookShare to Pinterest
Labels: HUGO, what he did, where he went
Location: Makati City, Philippines